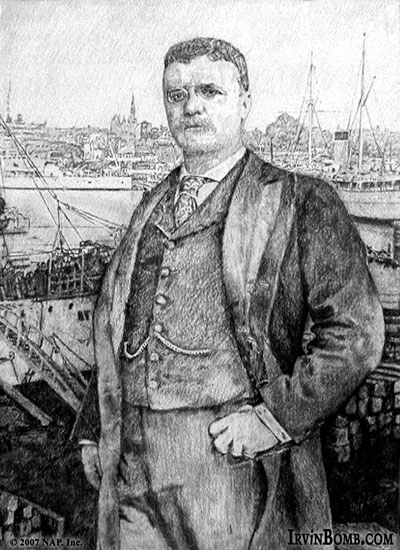 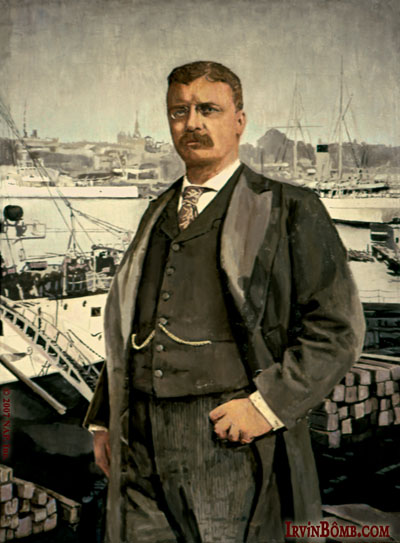 When artist Irvin Bomb was commissioned by the United States Naval Museum to paint his portrait of President Theodore Roosevelt, he was first asked to draw a portrait of President Franklin D. Roosevelt. The directors of the museum decided which president they wished Bomb to paint based on his portrait study drawings. Irvin worked in pencil, charcoal & conte crayon on paper. A stump was used to blend marks made with Bomb's drawing media. Gradations & half tones were produced with this technique. Bomb worked in black & white in order to focus on the narrative element required by the commission. Extensive research was required to portray the historical significance of these iconic leaders. 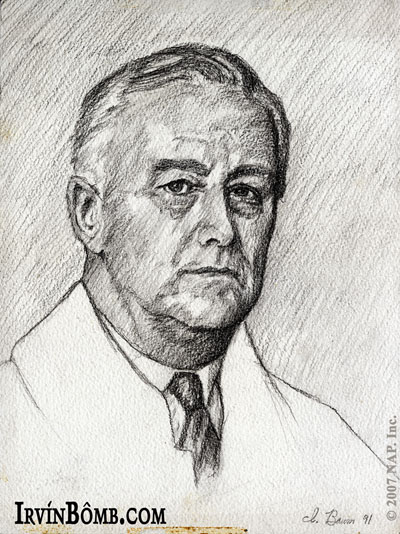 During Irvin Bomb’s early professional years as an artist he focused on traditional portraiture. When Irvin was commissioned by the US Naval Memorial to paint a portrait of former President Teddy Roosevelt, Irvin went to great lengths to research the time periord portrayed in his painting. Bomb’s intent was to have his artwork be restrained in color & to focus more closely on the subtlety of tonal variations in an effort to better document Roosevelt’s Great White Fleet.
Roosevelt was instrumental in preparing the Navy for the Spanish-American War and was an strong proponent of testing the U.S. military in battle. The painting of Teddy Roosevelt captures the great leader in a proud moment standing in front of U.S. Navy battleships who, from the dates of December 16th, 1907 to February 22nd, circumnavigated the globe. This expedition would later be known as the Great White Fleet. Roosevelt sent out these sixteen ships to demonstrate the growing American military power.

Discover art on the web...

We accept payments by: